Special thanks to MAX, Marios Epaminondas and of course to all the musicians.

A school project about  social inclusion

The following video was produced by the Icelandic National Agency of the Youth in Action Programme. The video provides instructions on how to fill in an application form for the all actions of the Programme except for the European Voluntary Service (Action 2) and the Action 2.1.


Don’t forget to contact your National Agency before submitting your application form.

The EU Youth Conference of the Cyprus Presidency held in Nicosia, Cyprus on 11-12-13 of September 2012. The topic of the conference was the “Youth Participation and the Social Inclusion of young people with migrant background”. The conference  broadcasted in the European Youth Portal.

The Eurodesk Cyprus participated actively in the conference by disseminating the updates in the social networks and by collecting testimonies of youth delegates.Furthermore, the Eurodesk Cyprus prepared a bilingual interactive newsletter dedicated to the EU Youth Conference.

The topics of the newsletter are:

The newsletter is available HERE.

The United States of Europe – a travelling exhibition about European identity and today’s Europe – on exhibit in Nicosia from 17th September.

The bilingual interactive newsletter of the Eurodesk Cyprus provides information about the Cyprus EU Presidency.

Visit also the official website of the Cyprus Presidency: http://www.cy2012.eu

The civil society or alternatively the third sector is an important stakeholder in the society because it gives voice to the citizens by empowering various social structures. The promotion of non-governmental and non-profit organizations is associated with the peace construction in conflict areas. The education is a field that could stimulate the active youth participation and the tolerance among the people. The educators can shape a culture of tolerance and acceptance among the young people from different backgrounds.

The web 2.0 platforms may reinforce the civil society’s campaigns about peace and democracy because it is a way to participate, spread campaigns and exchange good practices with other people globally. The digital media could be characterized as the revolution in the field of communication, each one of us, has the chance to share his/her views and learn about new ideas and tendencies. The e-participation is a youth friendly form of active participation because the young people are familiar with the social media platforms such as facebook, twitter and blogs. The civil society has a unique chance to boost their campaigns through the social media; the young people tend to pay more attention to facebook posts than to emails. On the other hand, the civil society actors and the young people should be equipped with “digital skills”, in order, firstly to endorse their ideas efficiently and secondly to avoid some traps. According to the above, it was build the argument that the “digital education” should be part of the school programmes as well.

The civil society should also boost the youth volunteerism in the border regions between countries where there is a conflict and also lack of democracy. The borders have their own linguistic and cultural identity; the people tend to speak both languages, there are influences from the traditions of both countries and many mixed marriages. The most striking fact in conflict areas is the sense of belonging, people either feel they belong to both countries or they feel they don’t belong anywhere. The youth volunteerism, through many projects and programmes, in the short-term may facilitate the trust building among the people in the borders and the people who come from regions far away from the borders. In the long-term this could lead to a further development of the values of democracy and peace.

Currently, the economic crisis and the related emerging problems are making the work of the civil society organizations more difficult. In my opinion, the involvement of the young people in the democracy building process is more than essential because the youngsters will be the future citizens thus the future voters. The launch of democracy is connected with an active youth that defend and protect the Human Rights by thinking globally and acting locally.

The article was published in mahallas.com

The Eurodesk Cyprus promotes the sustainability through an interactive bilingual newsletter. The environment is one of the most important topics in the European agenda and also one of the Millennium  Development Goals of the United Nations.

Special thanks to Mr Charalambos Theopemtou. 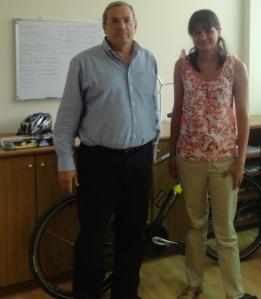 Mariepaz had an interesting conversation with Mr Charalampos Theopemptou, the Cyprus Commissioner for the Environment.

The Eurodesk Cyprus presents the structure dialogue process through an interactive newsletter with useful information, videos, images, resources,useful links and interviews.
They are also included the Guiding Questions of the Cyprus Presidency.
So!!!Get involved and influence the EU Youth Policy.

The newsletter is available HERE.
The videos from the workshops from the second phase of the Structured Dialogue cycle on “Youth Participation in Democratic Life in Europe” in Sorø, Denmark on 18-21 March, are available in the European Youth Portal.

The interactive bilingual newsletter of the Eurodesk Cyprus for the month March is dedicated to the European campaign “Youth on the Move”.
The “Youth on the Move” is a campaign that promotes the working,training and studying mobility in Europe.
The operator of the Eurodesk Cyprus,collected some testimonies from youngsters who participated in European Commission’s programmes.
There are also useful information and resources about Mobility opportunities in Europe,Comenius,EVS,Erasmus,Youth Exchanges,Erasmus Mundus and Leonardo da Vinci.

You may find the newsletter HERE

For Mariepaz it was a really intensive experience since she had the opportunity to talk with beneficiaries of European Commission’s programmes.

Feel free to email me or send me a Skype request :)

This work is licensed under a Creative Commons Attribution-NonCommercial 4.0 International License.